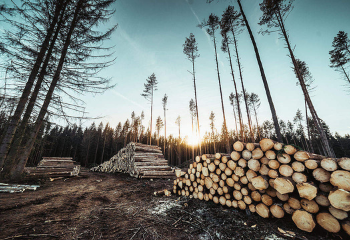 The COVID-19 pandemic negatively affected many different industries and the supply chains that support them, but a few stand out among the rest as having significant knock-on effects. For instance, factory shutdowns in Asia and the U.S. led to a severe shortage of microprocessors that power all kinds of electronic components, from computers to appliances to automobiles. That, in turn, resulted in production delays for all those popular and highly necessary consumer products.

A similar pain point emerged in recent months relating to reduced lumber production. Indeed, softwood lumber prices rose sharply over the past 12 months, resulting in an increase in costs for newly built homes to the tune of tens of thousands of dollars on average, according to the latest data from the National Association of Home Builders. This shortage largely arose because sawmills that produce lumber have been struggling to fill open positions; in fact, employment in the industry was down 0.8% on an annual basis in March.

Meanwhile, sawmill output has largely remained the same for most of the last five years and, if anything, has trended slightly downward, the NAHB said. At the same time, single-family home starts have risen appreciably — by roughly 33% — over the same period, meaning there’s less supply but significantly more demand. As such, the price of softwood lumber has increased roughly by 5.5 times its 2016 dollar figure since then.

Understanding the impact
Even on a near-term basis, lumber price spikes are highly volatile, according to Supply Chain Dive. Industry data suggests lumber futures contracts slated for delivery in May climbed to an average price of $1,645 per 1,000 feet of board, up 8% from less than a week earlier, 60% from a month prior, and almost 375% annually. This marked the largest increase in lumber prices since the explosion in domestic housing construction in the aftermath of World War II.

Some of the issues that led to these increases aren’t just related to labor supply, however, the report said. In some cases, tariffs from the last few years aren’t helping, nor is the rise in devastating wildfires in the Western United States. And while there was a sharp decline in home building in the early days of the pandemic, which gave sawmills increased confidence they could slow production, there was shortly thereafter a dramatic increase in home sales as people sought to move to properties that would be friendlier for work-from-home arrangements.

Supply and demand
As the headlines piled up in recent weeks, many industry observers noted that the increases were unsustainable, and that certainly seems to be the case, because those record highs have come crashing down again more recently, according to the Atlanta Journal Constitution. Between the end of May and mid-June, the price of lumber had once again fallen — by 41%. Prices remain well north of pre-pandemic norms, in some cases more than triple what they used to be, and volatility is expected to continue.

While perhaps not specific to lumber or fuel shortages, supply chain hiccups reverberating from the pandemic are certainly issues procurement and fulfillment professionals will have to monitor for at least the next several months, if not longer.

Hurricane season is here: The global supply chain must prepare

Is The Food Supply Chain Still In Rough Shape?

What’s going on with the global chip shortage?