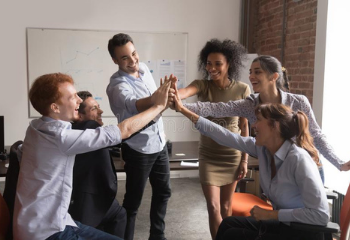 Returning to the office will be hard. Here’s how manager can make it easier.

The prospect of returning to the office brings up a range of reactions, from relief and excitement to fear and hesitation. Employees’ adaptations during the pandemic increased their sense of perceived safety during a crisis and letting go of those feelings and behaviors won’t be immediate. The authors offer four strategies leaders can use to support their employees and to help ease this transition.

Many leaders are contemplating a full or partial return to the office post-pandemic. As they consider this, they tend to think of employees in two opposite groups: those who are eager to return and those who are opposed. However, it’s important to recognize that some of the people who want to return to a shared workspace may nonetheless feel discomfort, some significantly so. Even after the acute danger of a crisis has passed, stress-related behaviors — whether the result of specific health concerns or the spillover of challenging family or economic situations — don’t magically disappear. Indeed, the American Psychological Association reports that a full 48% of vaccinated adults are hesitant to return to in-person contact.

This reluctance doesn’t mean they won’t resume working and meeting with colleagues in person, but it does mean that a transition period is likely in which they may exhibit variability in their energy, attention, and emotional control. They may seem fine at one time, and then uncertain at others — sometimes on the same day. As we’ve seen in our executive coaching practices, there are four things leaders can do that will help their employees navigate the transition back to the office.

In normal circumstances, people perform better when they have enough stability that they aren’t distracted and fatigued by frequent changes. That’s even more true post-pandemic, when employees — rattled by a year of uncertainty — will hunger for data and reassurance. For instance, prior to the return to the office, leaders might consider providing detailed information about office safety protocols and expectations, to help allay health concerns and enable nervous employees to visualize what their return might be like.

Viral transmission isn’t workers’ only concern, however. After being away from the office for a year, they may be unsure of their role in the company or how organizational dynamics may have shifted. Offering specific, sincere praise is a powerful way to allay employees’ concerns about whether you or other colleagues remember the value they bring. For instance, you might tell them, “I noticed how you brought Sarah into the conversation during our last meeting.” That kind of team building is especially important now.

Especially in times of stress, people benefit from talking about what they are experiencing. Listening with calm and sincere curiosity, without attempting to fix everything, is extremely valuable in helping people transition following disruptive events. One leader we know was opposed to allowing employees to express their post-pandemic worries because, he said, he didn’t want to have “group therapy” in the office. But as Amy Edmondson’s work on psychological safety has shown, the far greater danger is in a work environment that squelches conversation and creates fear of criticism or disapprobation.

Of course it’s important to avoid conversations veering into psychological analysis or an extended problem-solving session for one employee. Indeed, if psychological assistance is needed, there’s a place for it: one coaching client, a hospital president, made an office available for a psychologist on a rotating schedule, for any staff member.

One effective vehicle for allowing people to raise concerns in a non-threatening, productive setting is to discuss the new context of shared work now that the team is returning to the office. For instance, the leader can set the stage by saying something like, “Let’s take a fresh look at how we stay connected on our marketing efforts.” This allows people to raise concerns,  suggest changes, and feel a sense of self-efficacy.

After more than a year of working from home, many employees feel profoundly disconnected from others. That’s not just a personal challenge; it affects one’s performance at work because studies have shown that human connection helps people tolerate stress and recover from it. Many employees reconsidered their goals and priorities during the pandemic, with 25% considering leaving their job and 48% saying they prefer a hybrid model. It’s far easier to leave a job in which one feels lonely, or where interpersonal connections are lacking. Conversely, studies have shown that having a best friend at work is associated with greater engagement. Some of these connections are organic, of course — you can’t force friendships.

But as a leader, you can create the context in which it’s easier for employees, who may feel rusty about their social skills or interactions, to reconnect. Small gestures such as hosting “back to work” happy hours or group lunches make a difference; so do more informal, one-on-one solutions like suggesting that one employee talk to a colleague who has expertise in a certain area that’s relevant to a project.

Fourth, monitor and regulate your own emotions.

The pressure of being responsible for results, people, safety, etc., is no small feat, and more than a few leaders have told us that they don’t have time for themselves or that they see it as indulgence. The research on this point is clear: a leader who consistently sacrifices their welfare is vulnerable to emotional and physical exhaustion that impairs thinking and decision-making. Once a leader understands how significantly their well-being affects their leadership and decisions — as well as the mood of their employees, who watch their signals closely — it’s easier for many to prioritize taking time to re-set. A few relatively simple ways are taking walks, blocking the calendar on particular days or times, seeking out people for conversation who the leader doesn’t typically call upon, and engaging an advisor or coach who can provide support and additional reflection.

As the world emerges from the pandemic, leaders will observe a range of reactions in their people, from relief and excitement to fear and hesitation. Employees’ adaptations during the pandemic increased their sense of perceived safety during a crisis and letting go of those feelings and behaviors won’t be immediate. With the above strategies, leaders can be prepared for employees’ mixed emotions and help ease their transition back to work.

Liked this article ” Returning to the Office Will Be Hard. Here’s How Managers Can Make It Easier.” We recommend reading Covid-19: the perfect storm for employee fraud