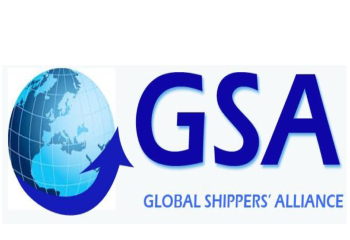 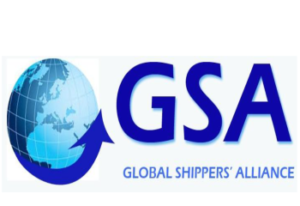 The Global Shippers’ Alliance (GSA) and its

individual members said that the impairments brought were immense and global economies and the public suffered tremendously as a result.

Shippers worldwide are furious at the chaotic shipping market and the lack of mechanisms to resolve it.

“Production, marketing activities, and distributions are all disrupted”, said Denis Choumert, Chairman of GSA and the European Shippers’ Council, “and economic costs are beyond measure”.

Godfried Smit, Secretary General of European Shippers’ Council, said “many major European ports are jammed, while container ships are waiting for a berth, inbound containers are sitting in the terminals to be cleared and shipping lines are refusing outbound bookings because they want to expedite return of the containers to the Far East”. Godfried went on, “outbound freight rates have risen 5-6 times and exporters may still not get a booking”.

The same happens in the Far East. Toto Dirgantoro, Chairman of the Asian Shippers’ Alliance and the Indonesian National Shippers’ Council said, “freight rates from the Far East to Europe have increased 10 to 15 times on some occasions and 3 to 4 times to North America, even for contract rates, and spot rates would be much higher. Shipping lines are accepting bookings based on profitability or long-term strategic importance, and, hence, small to medium sized shippers are sacrificed”.

Worse still, the industry is suffering from rapid deterioration of reliability and visibility. “Ships are skipping ports and even cancellation of the entire string is common”, Denis Choumert went on, “we call this practice blank sailings and their number in some trade increased as much as 30% lately”. Denis said, “and as little as 50% of ships arrive on-time – this affects the whole supply chain.”

Marianne Rowden, immediate past President and CEO of the American Association of Exporters and Importers, expressed that “the number of ships queuing at major American ports are rising. While COVID-19 lingers on and city lock-down continues, pressure on the transportation system and the whole supply chain is heavy”. She said, “the Federal Maritime Commission has been asked to look into the supply and demand situation, and we look forward to an increase of capacity shortly”.

Resolution of the current situation might be well beyond competition authorities’ jurisdiction. The ESC met with the European Union DG Competition in January 2021. “Shipping lines need to release more core information about capacity planning, capacity changes, service changes, demand forecast, etc. to clear themselves out of collusion claims. Shippers have little access to this sort of information and should rely on relevant authorities to safeguard their interests. Shippers are never on the same playing field with liners,” Godfried stated.

GSA would like to highlight the specific responsibility that carriers have to endorse in exchange of the protection they have from standard competition laws. This protection has been granted to carriers globally: the alliances of carriers are now the “gatekeepers for international trade” as they play a crucial role in the competitiveness of many businesses. They should not abuse of these privileges as it seems to be the case today.

For us shippers, it is worrisome that the European Commission recently allowed the renewal of the block exemption for liner shipping consortia without adding any tool or adjustment to check liners and better consider shippers’ interests, which could have been instrumental in preventing or mitigating some of the damage shippers are currently suffering.

GSA is aiming to establish a dialogue between all the market participants in view of finding a common approach to the current market problems and setting up an action plan regarding the overall ecosystem. GSA considers that the shipping crisis reflects insufficiency in the current regulatory mechanisms in protecting the wellbeing of the whole global supply chain and, particularly, the wellbeing of the shipping industry – a lifeblood of global trade. These mechanisms need to be reviewed immediately.

global shippers alliance, shippers, ESC
We use cookies on our website to give you the most relevant experience by remembering your preferences and repeat visits. By clicking “Accept”, you consent to the use of ALL the cookies.
Cookie settingsACCEPT
Manage consent