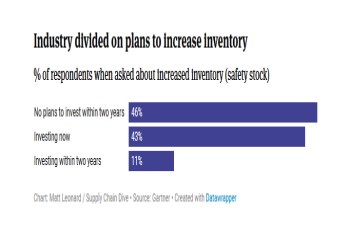 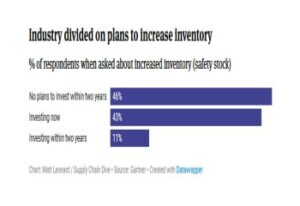 A survey of 1,328 supply chain professionals found 46% of them have no plans to increase inventory within the next two years, but 43% are investing in safety stock now with another 11% planning to do so within the next two years, according to the poll results from Gartner’s Future of Supply Chain: Crisis Shapes the Profession report.
The survey found that 21% of 1,339 respondents considered the availability of safety stock to be a top-three indicator of supply chain resiliency. The top responses to resilience indicators were order fulfillment cycle times not being disrupted (43%), positive consumer feedback (40%) and perfect order fulfillment metric not significantly disrupted (36%).
But this doesn’t necessarily mean that just-in-time supply chains are going anywhere. The survey found 47% of respondents disagree that lean supply chains will be less applicable in future strategy while 19% agreed and 34% were neutral.

Some of the split in building up inventories comes down to variation among industries, according to Gartner Vice President of Supply Chain Research and Advisory Geraint John.

John said industries like automotive and high tech were more likely to consider increasing their inventory and safety stock. The current shortage in semiconductors leading to production slowdowns and stoppages could help explain the interest in increasing inventory buffer in these sectors, he said.

“You see companies like General Motors issuing statements, calling on suppliers to try and increase their safety stocks of key chips, integrated circuits, in some cases by suggesting that maybe they should be holding a year’s worth of stock,” he said, adding that similar conversations are happening in the high-tech sector.

Some companies are actively working to figure out and develop inventory health metrics to determine where more safety stock should be held, John said.

“It has to be extremely targeted and extremely tailored,” he said. So firms will look for particular bottlenecks to see where it could be most beneficial to build stock to avoid shortages.

On the other end of the spectrum, industrial, chemicals, and aerospace and defense are industries that showed less interest in building inventories. John said this could be the result of these industries already operating on less lean operating models, but also industries in the industrial sector tend to have more localized supply chains with shorter lead times.

This variation among industries also showed up in Gartner’s survey question about the future of just-in-time and lean. Automotive respondents were among the least likely to agree that lean will be less applicable in the future. The industry has a long history with lean supply chains.

John noted that changes to inventory strategy can be very short term. Companies can build up stocks more during hurricane season or other known disruptions, for example.

“Buffer stock is perhaps sort of perceived as one as a quicker and easier sort of resilience strategies you can adopt,” he said. “And it doesn’t have to be a permanent change.”

But there are also limits to companies’ abilities to build up safety stock. Suppliers might not have the production capacity to increase supply to meet the buyer’s demand, which is what has played out with semiconductors in recent months, he said.

The deepening of relationships is likely to involve more sharing of data and forecasts in an attempt to increase visibility between companies. In other cases it could mean the buyer introducing themselves to deeper tiers of the supplier ecosystem for the first time, John said.

supply chain, inventory, survey, gartner
We use cookies on our website to give you the most relevant experience by remembering your preferences and repeat visits. By clicking “Accept”, you consent to the use of ALL the cookies.
Cookie settingsACCEPT
Manage consent